Remembering the 1953 flood in Holland 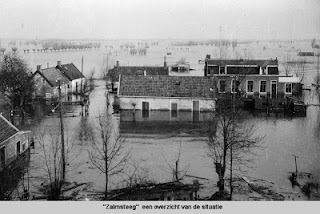 My friend placed some pictures of the flooding that happened here in Holland in 1953 (now sixty years ago) on her quilt blog Sweet Home Ala Marja. One of the pictures shows our house, all the way in the lower left corner.

Our town is situated on a dike that is supposed to keep the water out (remember that most of our country is below sea level). But on January 31st in 1953 the dikes broke in several places and parts of the country flooded and thousands of people were killed. Many survivors remember that horrible day all too well.

Sometimes the water in the river still rises to dangerous levels, especially during a storm and full moon. 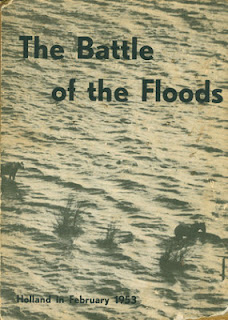 I was born ten years after that national disaster, but I remember looking, together with my brothers, through the book The Battle of the Floods. We were filled with fear and sorrow when we saw the pictures of people in boats, of houses covered in water and of dead animals. We even recognized some parts of 'our dike' in the book. We really hoped nothing like that would ever happen again in Holland.

Natural disasters are not new, they have always happened. Noah witnessed the earth being under water for 150 days. In the Bible we can furthermore read about storms, droughts and earth quakes. The battle between mankind and the elements is a battle of all times. Cold, heat, drought or floods... they come and go, as do the opinions about our climate changes. Too cold, too wet, too warm or  too dry... Do we have to worry?

The Bible says:
As long as the earth endures, seed time and harvest, cold and heat, summer and winter, day and night will never cease.