Being a follower in a true sense of the word


A few weeks ago I wrote about a tree that is recognized by its fruit. We can call ourselves Christians, but would people recognize us as such without that label? In 1 John 2:6 we can read the following,
Whoever claims to live in Him must walk as Jesus did.
It means we have to follow in His footsteps, live like He did, do what He did.
The Bible tells us a lot about the way Jesus lived. It tells us about His family, friends and disciples. It tells us about his childhood and ministry. It tells us about His teachings, His toughts and His feelings. I would like to encourage you, read! Read about Him and learn from Him. Study His life and copy it. One of my favorite movies on DVD about Jesus is The Gospel Of John. Powerful, powerful movie! Live like He did, do what He did. Sometimes that may feel like we're jumping into the deep, but that is also the place where we will get our biggest catch!
Posted by Marja Verschoor-Meijers No comments:
Email ThisBlogThis!Share to TwitterShare to FacebookShare to Pinterest 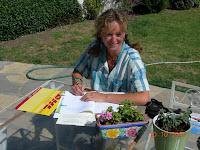 Halleluja! I can't tell you all how excited I am now that my 3rd manuscript has been accepted by Tate Publishing. Breath of Life is the 3rd book in my series about the Ten Commandments in the 21st century. It is based on the 6th commandment: do not commit murder. It differs from the previous two books in style; this one is a novel, based on biblical truths and principles. I truly believe this book will rock the nation and I pray it will change the way we value life! If you haven't done so already, please make sure you order and read the previous books so as to get acquainted with my style of writing and use of scripture. I could use your support in whatever form: prayers, e-mails, comments, ideas, anything! Together we can make this project happening!
Posted by Marja Verschoor-Meijers 2 comments:
Email ThisBlogThis!Share to TwitterShare to FacebookShare to Pinterest

The Rules Make The Game

An enjoyable life in freedom

Galatians 5:1 says: Freedom is what we have, Christ has set us free. Many people think the Bible is just a bunch of rules that will limit our freedom. Do this, don't do that. Who wants rules for living, we can live any way we want, can't we? Living without rules is not freedom, it is anarchy and it will lead to chaos and destruction. Living without rules is a false kind of freedom, because it will lead into slavery.
Let me tell you something about football, or soccer as we call it. Rules or guidelines are there to keep the game going. Without any rules the players wouldn't know what to do, or what not to do. The game would turn into chaos; no fun to play and certainly no fun to watch! I lived most of my life in Holland, which means growing up with football. That is what we call the game where two teams kick a round ball with their feet and try to score. I know most of the rules and when watching the world cup series for example I get really excited. Coming to America my husband and I tried to watch a couple of games of American football, just to get accustomed with that part of American culture. Believe me, not knowing any of the rules, the whole game just does not make sense. All we can see is heaps of people falling over each other just in time to be stopped by the whistle whenever they get hold of the ball. It seems they never get to where they want to be. In the mean time we can hear and see the crowds screaming and hollering, so we know something good is going on. We just do not know how to interpret the movements. Looking at the excitement of the crowd we know a game of American football is definitely different when you know the rules. Knowing the rules, whether playing or watching, keeps the game going. The rules make the game!
I am using this analogy to make a simple point: rules are needed to play a fair and exciting game. God's rules are needed to be able to live a fair and exciting life together with the 6 billion other people on this earth! The rules won't determine the outcome of the game, but they'll make it a lot more enjoyable. Obeying God's rules won't bring us the victory, which is eternal life, (only faith and grace can do that) but it will assure us better life on earth! The freedom the Bible talks about is freedom from sin, from guilt, from sickness, from fear and worries!
Posted by Marja Verschoor-Meijers No comments:
Email ThisBlogThis!Share to TwitterShare to FacebookShare to Pinterest
Newer Posts Older Posts Home
Subscribe to: Posts (Atom)