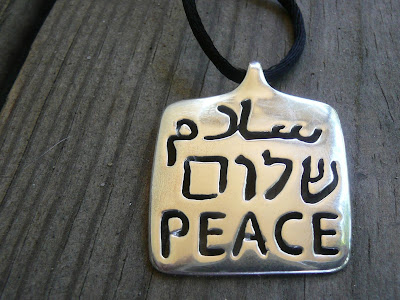 'As far as God is concerned, the friendship has been restored' I wrote in the previous blog post. Reconciliation simply means 'restored relationship'. The Bible shows that concept on various levels: God and mankind in general, God and Israel specific....

And what about us... how do we relate to one another? What can be said about the reconciliation between Jews and Gentiles (non-Jewish people)? Currently we can see a worldwide anti-Semitism rising up again, with severe hatred in Europe and the Middle East. Have we not understood God's plan of reconciliation?

Why are the Jewish people different from all other people on earth? Did they ask for that? Did they make it up? No! God wanted it that way. In Leviticus 20:24B He says: I am the Lord your God, who has set you apart from the nations. Israel and the Jewish people were set apart because they would bring forth the promised Messiah. Jesus (the Jewish Messiah) acknowledged this fact in His discussion with the Samaritan woman when He said that salvation would come from the Jews (John 4:22).

Jesus, the Son of God, was born of a Jewish mother. He lived and worked in Israel. He came to bring reconciliation between God and all of mankind, starting with the Jewish people! He said: I was sent only to the lost sheep of Israel (Matthew 15:24).

The apostle Paul explains it again in Romans 1:16, For I am not ashamed of the gospel, because it is the power of God that brings salvation to everyone who believes: first to the Jew, then to the Gentile. Until the time of Jesus it was forbidden for Jewish people to mix with other peoples/nations (and in some orthodox circles it is still so). It drastically changed when the apostle Peter began to understand Gods grace through a vision (Acts 10:28). The good news of reconciliation is now for everyone! (Acts 10:34-36).

Through our faith in the Messiah our relationship with God has been restored as well as our relationship with the Jewish people, we are now brothers and sisters of one Father. Romans 10:12 explains it like this: For there is no difference between Jew and Gentile—the same Lord is Lord of all and richly blesses all who call on him, for, “Everyone who calls on the name of the Lord will be saved.

God's specific plan with Israel (also called the olive tree) is still standing. The gentiles (non-Jewish people) are branches that are being grafted into this tree. We will grow together and bear fruit!

Think about it: reconciliation = end of conflict! Wouldn't it be great to see that happening in our world today? It starts with this question: Have you fully accepted His plan of reconciliation?